Sorry, no pictures were taken of this process. Camera batteries were dead.

The front speakers are rated at 160 watt max and the rears at 300 watt max. They are a decent upgrade for a factory speaker. The rears are a little under-driven by my Sony Xplod (CDXGT11W) head unit, but they do sound quite good. The highs aren't as clear as I would like from the rear, but that's not what the rears are for (a small amp would remedy this nicely). They are more for bass response than mids/highs. The front speakers are very clear and have great response and sound quality. The whole system upgrade cost me about a hundred bucks, not including the head unit, which came from my Jeep.

The head unit adapter kit and the wiring adapter are both from Crutchfield.

Replacement of the Rear Deck Speakers:

1) Remove the center screw (if equipped) from the Package shelf
2) Remove Seat bottom. Push in on each edge, the pull up. The bottom should then lift out.
3) Remove seat back. Using the ratchet, extension and T-45 Bit, remove the two center Seat belt/seat back support bolts.
4) Pull up on the seat back to disengage the slots that hold the seat back to the rear firewall.
5) Remove the seat back from the vehicle.
6) Now you have access the package shelf. In most vehicles, you don't need to remove the sail panels. Just flex the shelf slightly in the middle and remove it from the vehicle after disconnecting the plugs. Be careful as the speakers will most likely be attached to the underside of the shelf.
7) Take the shelf over to a flat surface and remove the 7M screws form each speaker. They are also glued to the panel. so once the screws are out, carefully break the glue bond with a small flat blade screwdriver.
8) clean up the metal mounting plate of the glue/foam that remained from the OE speakers.
9) install the new speakers onto panel using the OE screws and connect the wiring using the stripper/crimpers and the Butt connectors and covering them with the Electrical Tape. Be sure you have polarity correct on the wiring. You could use solder and solder gun, but I lack those items at this time.
10) Reinstall the panel into the vehicle, just reverse the removal directions. You may have to remove the rubber insulator cups from the firewall to get the new speakers to drop into the wells.
11) reinstall the seat back and bottom routing the seat belts through the plastic loops to locate them properly. Torque the seat back bolts firmly. My book doesn't list a torque Spec. for the bolts.

Replacement of the front Dash Speakers:

1) using the stubby Phillips Screwdriver, remove the two screws that secure each of the speaker grilles to the dash.
2) lift the speaker grilles from the dash. The speakerr are attached to the underside of the grilles. Be careful here as you don't have a lot of wire length to pull the speakers out with.
3) unplug the speakers from the wire harness.
4) take the speakers/grilles to a flat work surface and remove the 7mm screws attaching them to the grilles. You may have to break the glue bond between the OE speaker and grille.
5) There are two tabs on the windshield end of the grilles, they need to be cut off for the speakers to fit properly back in the dash. A pair of linesman's pliers work great for this.
6) Install the new speakers onto the underside of the grilles.
7) Using the stripper/crimpers connect the OE wire to the new Speaker leads with Butt connector. There are speaker wire adapters for this, just plug and play after connecting the speaker lead wires to the adapter.
8) Drop the grilles/speaker back into their mounting locations once you connect the wires after verify correct polarity. Install the screws snugly.

1) for safety purposes disconnect the negative battery terminal.
2) Remove the four 7mm bolts that attach the dash face to the dash board. Remove the Headlamp knob. twist the know to where you can see the notjch, then using a screwdriver depress the tang and slide the knob off the Dimmer adjustment shaft. These are at the bottom rear (closest to your knees) edge of the panel.
3) remove the Ashtray, just pull it out, no screws here.
4) remove the trim panel below the steering column. There are two 7mm headed bolts on the outer edge. The ALDL may be attached to this as well. just remove the screws and let it hang by the heater duct.
5) remove the Phillips headed screw from the underside of the panel of the steering column and gently pull the rubber boot on the steering column back towards you.
6) Some vehicles may require the unclipping of the shift indicator point guide wire.
7) Gently pull the dash face panel towards you, starting at the bottom. Once the clips are at the bottom are disconnected, tilt the steering wheel all the way down.
8) now, tilt the bottom of the panel toward you and work it over the steering column.
9) with the panel removed, set it aside in a safe place.
10) remove the 10MM nut on the side of the radio using a 10 MM open ended wrench.
11) remove the 7MM bolts from the dash and pull the radio out far enough to disengage the wiring. There are a total of for connections, but only two plugs. There are three small male connectors for the vehicle harness that go into the one plug on the radio and one smaller two prong plug for the constant power feed for radio memory.
12) one the wiring is disconnected. remove the radio from the vehicle.
13) Remove the bracket from the radio by removing the 10MM nuts.
14) Install the bracket in the correct orentation on the head unit adapter plate if your using a single DIN head unit, or follow the directions for the new stereo.
15) connect the wiring from your head unit to the adapter harness using the Butt connectors, Electrical tape and stripper/crimpers.
16) install the head unit adapter into the dash using the OE 7MM screws. Don't worry about the side bracket. It's not close enough to the adapter bracket to be used effectively.
17) connect the adapter harness the three vehicle harness plugs. They are keyed, so you can't mix them up.
18) reconnect the battery cable.
19) plug in the new head unit and test the system.
20) if satisfied, install the head unit into the adapter or dash following the instructions supplied with the kit after making sure the wires are tucked behind the head unit and not pinched, don't forget to plug in the antenna (most vehicles will require an antenna adapter).
21) install the dash panel, making sure the clips are fully seated.
21) Replace all the screws/bolts you removed and enjoy the sound system!

I guess that would make me the third gen interior expert. I've had nearly every panel out so far.....

I was thinking about selling the car once I got my Jeep running, but I like it too much to sell now. The comfort can't be beat....
R

Classic luxury car, has that... well... what we called "pimpmobile" look. I like them, and you say its a nice ride and drive ? What is the engine a 307 ? You'd have to like Jeeps alot to get rid of the Toro, actually I think they would complement each other having two entirely different purposes.
P


The Jeep and the Toro go together quite well. 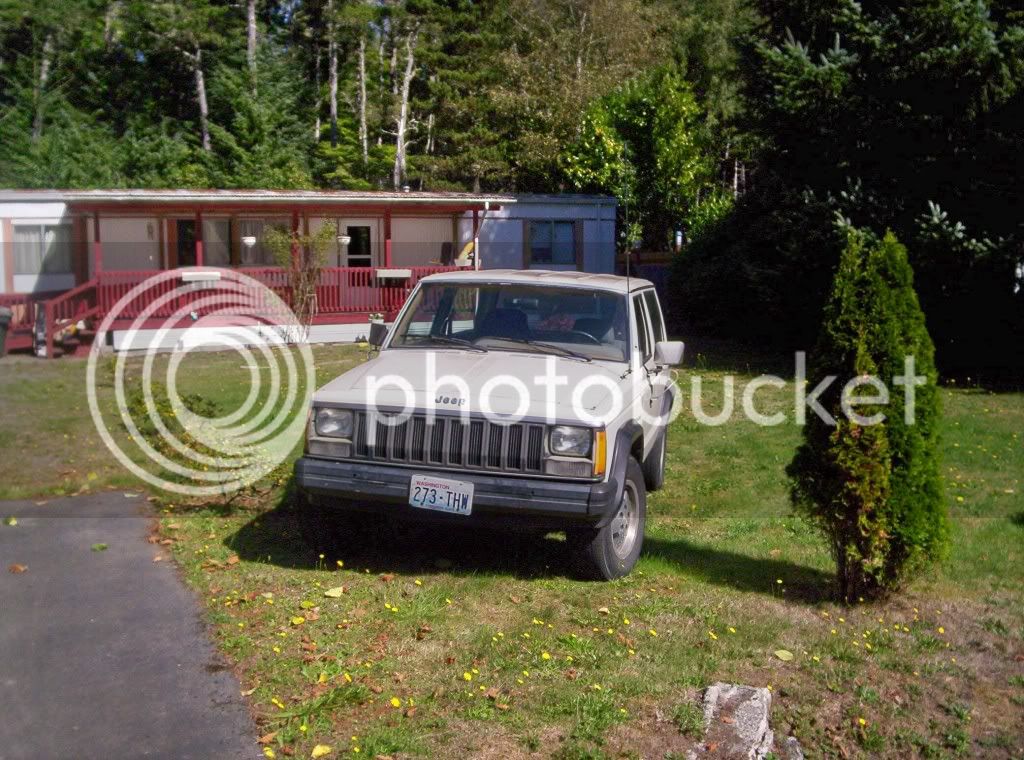 The Jeep is rough and tumble, the Toronado is refined and cushy. They're both from the eighties, so they have the "square box" look. I like them both, and they will both be in the family for a while to come.
Last edited: Jan 10, 2010
R

Nice, thats like "Champaign" right ? Im glad it doesnt have the landau top, they were so over done at the time and look terrible after they age. You could probalby find that passenger mirror sooner or later, not sure about the bumper fillers I guess that was a common issue.
P

The mirror has been missing since before I bought it. I am on the hunt ofr another one.

The bumper fillers are going to be a while, it seems that no-one makes replacements....

If someone here has an idea of where to go, please let me know.
M

I also have an'84' toronado! I was wandering when you replaced your front speakers did you have problems with the passenger side. And is only 4x10's the only ones that can be put in the rear deck?
Share:
Facebook Twitter Reddit Pinterest Tumblr WhatsApp Email Link
Top